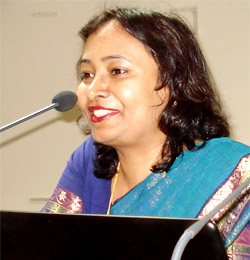 Dr. Anita Goel is a Professor of Computer Science in University of Delhi, Dyal Singh College. Dr. Goel is Ph.D in the area of software testing from Jamia Millia Islamia, New Delhi in 2005. She is MCA from Department of Computer Science, University of Delhi in 1988 and BSc (Hons) Physics degree from Hindu College, University of Delhi in 1985. She is an alumnus of DPS R.K. Puram, Delhi. Dr. Goel is teaching at both undergraduate and post graduate levels. She is teaching at Dyal Singh College since 1988 and has been the Head of Department for over 15 years, during this period. She is a guest faculty at Department of Computer Science, Delhi University since 2005 and at Delhi Technological University (earlier DCE) since 2008. She is an adjunct faculty at NIIT University since 2011. Dr. Goel has worked on deputation as a Fellow in Computer Science in Institute of Life Long learning (ILLL), University of Delhi, from 2010 to 2011, and as Academic Secretary (ILLL) from September 2010 to April 2011. Dr. Goel has more than 30 publications in International journals and conferences in the broad area of software engineering. is a research supervisor to students pursuing their doctoral degree. She has worked in software testability of object-oriented software and aspect-oriented software, requirement and design of web 2.0 software and applications of web services for education management. Currently, Dr. Goel's focus is on Cloud Computing. Dr. Goel has authored a book titled Computer Fundamentals, published by Pearson Education, in June 2010. The book has also been customized to the syllabi of Universities, like, Acharya Nagarjuna University - Andhra Pradesh, West Bengal Technical University, Gautam Budh Technical University, University of Mumbai, Sant Gadge Baba Amravati University - Maharashtra, Uttarakhand Technical University. In 2012, she has co-authored a series of three books in Computer Science e-world ICSE Edition for students of class 6, 7 and 8.